The Good, the Bad, and the Gross: Food Shopping in Shanghai 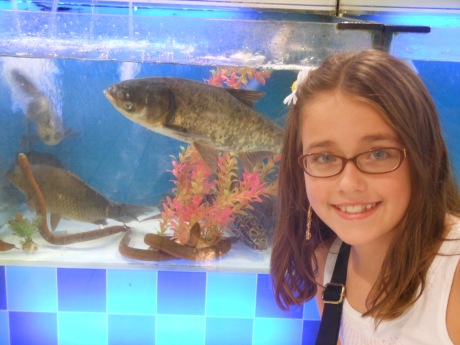 Are those soon to be pets behind Cassidy, or someone’s dinner?

“What the hell is that,” I asked Karen in horror.

“I think you’re right,”  she said, stepping back.

And so ended our very first food shopping trip in Shanghai.  That was on our pre-trip and, as I’ve mentioned here before, we were warned not to go to food markets on the weekend because the crowds were brutal.  But we had a free day before the official guided tour of Shanghai and Karen thought going to Carrefour market on a Saturday might be a hoot.  So we went.  The crowds were insane, but became the least of my worries once I got to the food section.

I mean really, what is this and who eats it?

First off, everything was written in Chinese, including ingredients.  So we did not have a clue what we were looking at.  That’s a problem on several fronts, but mainly because our daughter Cassidy has a peanut allergy and we need to be able to read ingredients.  Secondly, some of what I was looking at was horrific and unidentifiable.  When I say unidentifiable, I’m talking about beasts I’ve never seen before, parts that I hope never to see again, and things in water that need to stay in the water.

The insanity of Carrefour on the weekend, and everything is in Chinese!

Standing in the middle of all this chaos, I started to assume all food markets in Shanghai were like what I was witnessing at Carrefour.  I gotta admit, I began to panic.  There was no way I could ship enough food from the U.S. to feed us for three years or so.  Plus, we were told that our sea shipment could take as long as 90 days and we could only pack dry and canned goods.  That meant a very hungry first three months in Shanghai, because I knew one thing for sure — there wasn’t a chance in hell that my girls would eat what I was looking at….and then something moved and we fled. 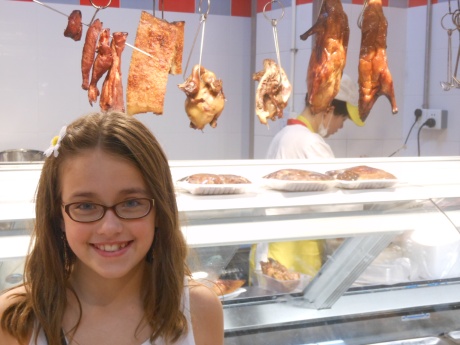 Cassidy and some hanging stuff at Carrefour that neither she nor I will ever eat.

We returned to the sanctity of the Park Hyatt and I started to have seriously dark second thoughts about moving to China.  My freak out was making Karen crazy so she sent me to workout.  That helped, but even better, our realtor in Shanghai, Liza, heard where we’d gone and what we had seen, and made arrangements for us to go to a food market the next day called City Shop.  All hail City Shop.  We were saved!  There was Kraft mac and cheese, and frozen waffles, and french fries, and potato chips, and recognizable lunch meat at the deli.  We could eat!  Not well, but I could feed my family from this store nonetheless, and my freak out passed — we would be able to eat in Shanghai.

Like an oasis in the desert, City Shop’s beautiful, American style deli counter appeared before us.

As we got settled, I began to learn about the good, the bad, and the gross of Shanghai food shopping.  There are food markets that almost exclusively cater to Westerners (not a lot, but enough), markets that cater to both Chinese and Westerners (Carrefour, E mart, Lotus, Walmart, etc.), markets that cater almost exclusively to Chinese (everywhere), and “wet” markets, which are VERY local and about which I will explain shortly.  Once I understood the lay of the land in this regard, buying food and feeding the family became easier, though expensive.

I use two very good online grocery stores here, Fields (fieldschina.com) and Shanghai ExpatMart (shanghaiexpatmart.com).  Fields has good vegetables and fruit — much of it organic — as well as meat — much of it organic and from Australia and New Zealand — as well as fish, dairy and baked goods.  ExpatMart has a lot of American canned and dry goods, as well as basic household products.  I use both to supplement what I and our ayi Sunny buy every week. Also, both deliver beer and wine (woo hoo!), with ExpatMart also delivering liquor.

In Pudong, on the side of the Huangpu river where we live, there are several Western-oriented markets that I use almost weekly.  My favorite Western market here is City Super (citysuper.com.cn), which is under the big IFC mall  downtown, and carries a lot of food that you would recognize back home, though it can be expensive.  As I said earlier, I also like City Shop (cityshop.com.cn), which has a couple of Pudong locations.  In addition, I use Pines Market in the Green Sports and Leisure mall and PIC Fresh on Biyun Lu.  The last two are smaller markets that stock a good amount of Western food but don’t have websites.  Finally, there is Ole in the Kerry Parkside mall, which I don’t really like because it’s overpriced and stocked with funky stuff that someone who is not a Westerner thinks a Westerner wants.  There also is Metro (metro.com.cn), which is just like Costco and caters to both Westerners and Chinese.  And of course, there is Carrefour (carrefour.com.cn), which I maligned earlier solely because it was the first place we went and was unlike anything we had seen before.  Now, we are in Carrefour at least once a week, though rarely for food, because it sells cheap merchandise like electronics, clothes, and cleaning supplies.  By using a variety of these markets and the online stores every week or so, I am able feed the family good, relatively healthy, and mostly familiar foods.

My favorite food store in Shanghai, City Super, is very much like upscale grocery stores in the States.

Note: I’m about to tell you — and show you — more about Chinese wet markets.  If you get queasy at slaughterhouses, or are a vegan, you may want to stop reading now.

Sunny cooks a couple of nights a week and she usually cooks pretty good Chinese food.  She, like all ayis, shops at what are known here as “wet” markets, so called because the vendors continuously use water to keep the muck on the floor moving, keep fruits and vegetables fresh, and fish and shellfish alive.  The fruits and vegetables are brought in daily from small farms in and around Shanghai, and are generally as fresh as you can get anywhere.   They are also generally free of pesticides as compared to the produce in the larger grocery stores that get their produce from larger, corporate farms. 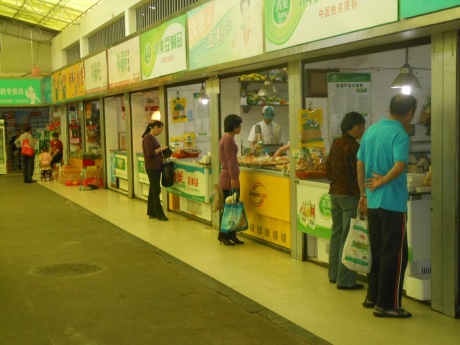 Stalls on the produce side of Sunny’s wet market are nice and washed down.

Wet markets also sell meat, though it is sold separately from the produce. Thank God!  Like the produce, meat is sold fresh as well, though that’s where things get gross.  The meat sold at wet markets is generally poultry, pigs, fish, and various types of reptiles.  To keep the meat fresh, the creature is often whacked when you order it, and butchered right there in the stall.  It’s an ugly, messy business and another reason why they are called wet markets.  As you can imagine, we don’t get our meat from the wet market but instead order it online from Fields because it’s almost all free range and grass fed. 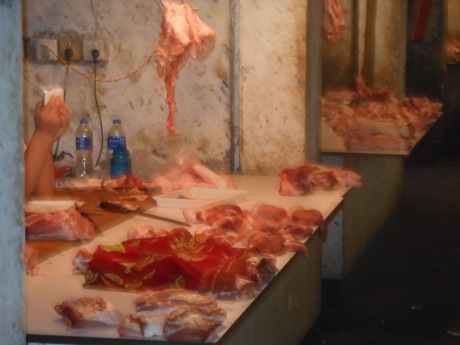 Stalls on the meat side, not so much……

As you will note from the pictures in this post, Sunny took me to her wet market and it was quite the eye opener.  It was surprisingly large.  There were no prices or signs identifying any of the products and all transactions were done by the barter system.  People smiled and pointed at me, as I was clearly an oddity in the market, but Sunny knew everyone and they were all very nice as I took pictures of their goods.  The meat stalls, as advertised, were repulsive and smelly, with bloody, gelatinous parts hanging or spread out on every available inch of the space.  I took some quick pictures and then moved on, trying to avoid wayward splatters, signs of which were everywhere. 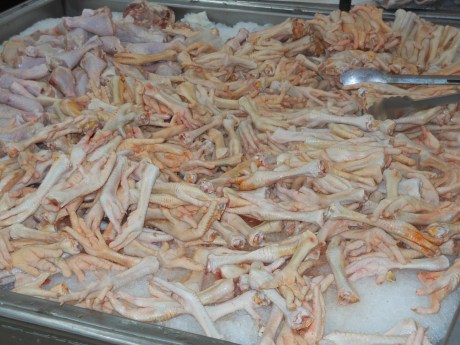 Did I mention parts yet?

The fruits and vegetables were impressive.  Though we were basically in a large warehouse with cement floors filled with wobbly looking wooden stalls, the produce arrayed in front of me looked like I could have been in a Whole Foods in the U.S.  It was all beautiful and fresh looking and there was lots of it.  It made me feel good about my decision to give up produce shopping control to Sunny.  At the time, I was unconvinced that she could find better than at the Western markets, but I was wrong.  Now, the girls eat more veggies and fruit in Shanghai than they did in the States.

The produce at the wet market was very fresh and beautiful.

And that’s how we food shop in Shanghai.  It took a couple of months to figure it all out, but it all works for us now.  No one is starving or forced to eat something they can’t name.  Yes, there are still many unidentifiable foods that I come across every week, but I’m gonna take baby steps with that stuff.  Dinner tonight?  Turkey burgers, sweet potato fries and a veggie stir fry, just like at home. 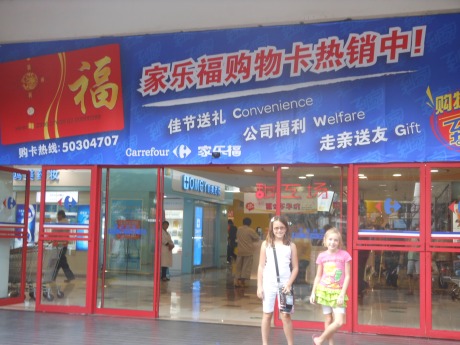 2 thoughts on “The Good, the Bad, and the Gross: Food Shopping in Shanghai”