How Technology Saved Our Dog

Karen and Steph playing with PhotoBooth the day our Mac got hooked up and we went live.

One of my great fears about moving to Shanghai (and there were many) was losing touch with family and friends through the lack of technical capacity in China.  I heard stories about Facebook, Twitter, and even WordPress being blocked, all of which proved to be true.  I use FB and WordPress a lot and was concerned about what this might mean overall for connecting to folks back home.  The thought of going “dark” sent me into a tailspin.  I imagined myself alone, padding around the new Shanghai house while the girls were at school and Karen at work, unable to communicate with people.  I imagined going nuts and trying to strike up conversations with the dog.

At first, that scenario almost played out.  It took about a month for us to get connected to the internet, which was done through the WiFi provided by the management company of our housing development.  We couldn’t get the blocked sites I mentioned, but it was better than nothing.  And like so much in China, it only partially worked.  (Thus the source of the ubiquitous expat phrase, almost always followed by a sigh, of “it’s China”).  We couldn’t get our Vonage internet phone to work.  Email was intermittent, and we often just got kicked off of WiFi.  It was maddening and I started funny-eyeballing the dog.

Gabby clearly fired up about spending all day chatting with me.

Then, to our rescue came James Hounsell.  I reconnected with James, after meeting him during our pre-trip, at a workshop he held through the Community Center Shanghai (communitycenter.cn).  It was all about Apple technology and the devices that use it.  He was also a participant in a workshop presented by the Community Center called “Shanghai 1,2,3,” which is a must-attend event for anyone moving — or recently moved to —  Shanghai.  It’s very good at giving you the ins and outs of living in Shanghai, and helps explain the cultural milieu you now find yourself in.

In the “Shanghai 1,2,3” workshop, James went beyond Apple products and helped shed light on how technology does, and sometimes doesn’t, work in China.  Almost every expat family that comes to Shanghai requires technical assistance beyond the basic services offered by their development management company or landlord.  James saw a market and formed a company called Texponent (texponent.com) to help expats with all their technology issues.  So if you come home to find your spouse sitting on the living room floor, wrapped in various cable wires and pounding a router on the floor because it won’t get the internet, remember:  James can help with that! 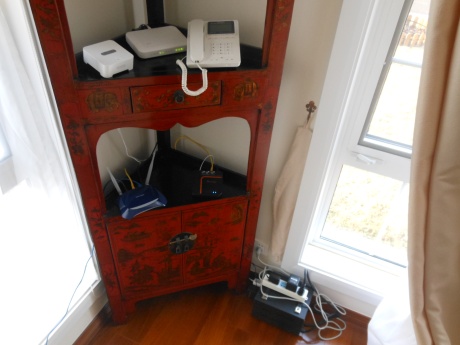 What we call our tech corner: Couple of routers, Vonage system, and Sonos, plus a big transformer to plug it all in.

When you call him, James will do for you what he did at our home, which is to meticulously go through all your electronic devices and make them work.  Our issues were many and involved WiFi, Vonage, the Sonos music system, all the various “i” devices in the house, and even cable TV.  In about an hour, James had everything up and running.  I was able to turn on music from my iPhone and iPad, which almost brought me to tears.  We were as hooked up as a family can be in China, which has made for a happy household.

Cassidy and her buddies work on her Apple laptop at school.

Though I didn’t believe it before I got here, you can be as connected in Shanghai as you are in the U.S. You just need to work at it a bit, have a little patience, and know the right techie folks.  And James is not the only resource for expats in Shanghai.  There also is Shanghai Geeks (shanghaigeeks.com), Avalaa SecureWeb (avalaa.com), and iSpot (618 Biyun Lu, Pudong), an authorized Apple reseller and repair store.  All three companies focus mainly on the expat market and speak all computer languages, as well as Chinese and English, which is really helpful.  And of course, there is Apple, which has been in Shanghai for just over two years and is clearly the technology company of choice in China.  There are now three Apple stores (apple.com.cn) in Shanghai, one in Pudong at the IFC Mall, and two in Puxi, one at Nanjing Lu East, and the other on Huangpi Lu South at the Hong Kong Plaza.  The stores and the people working in them are just like at Apple stores from home.  The employees are very hip, friendly and knowledgable, and the stores are a technophile’s playground.

So, unlike how I imagined it, computer technology works just fine in China.  As a family, we are all on our various devices, in touch with new friends here and old friends there.  And best of all, I’m not chatting with my dog all day, which is a really good thing for both of us.

Cassidy on her iPhone in front of the Pudong Apple store, with the Pearl Tower in the background.

3 thoughts on “How Technology Saved Our Dog”