Trying to Dodge the Expat Funk

Taking the dog for a walk on a particularly bad air day. (She doesn’t really wear a mask.)

I recently reread all the posts in this blog and came to two conclusions:  1)  I am absolutely shameless when it comes to my daughters, and will post photos of them willy nilly whether they are relevant or not;  and 2)  It appears that I’m pretty happy with this China gig.

Stephie at Yu Garden on a normally clear and sunny Shanghai day. (This is not a gratuitous insert as you will see in a moment.)

I have two friends here, Lisa and James, who each told me before we moved that expats inevitably hit the unhappiness wall within the first year of their arrival in Shanghai.  They differed on the time it takes to hit that wall — Lisa 3 months and James 9 months — though both agree that once you do, you will have the expat funk in your head for a while afterward.  Going through the terror I experienced in the final weeks approaching our move to Shanghai, I expected to set a new expat land speed record and hit that wall within days of arriving.

But remarkably, I didn’t hit the wall.  Within the first month of our arrival I had a scooter, started blogging about it, joined up with a group of guys here called The Guy Tai’s (more on that in another post), got involved in the girls’ school, met a bunch of cool Chinese folks, and started to experience the wonder that is Shanghai.  By month 2, I was perfectly giddy about China, which was actually starting to annoy some other expats.  That’s because we all have a pretty similar experience:  We came from great lives in our home countries, with nice houses, wonderful families and friends, killer summers spent in places almost always referred to as “up North,” have holidays that make sense to us, and can almost always identify the food served to us at home. 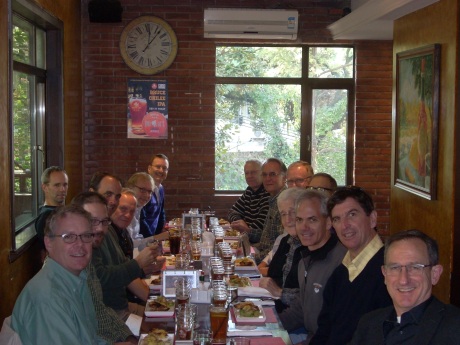 Guy Tai’s — usually trailing spouses who get together and socialize in Shanghai. This pic is some of us at the Boxing Cat brewery in Puxi. Great IPA’s!

Then we wake up one day in China and nothing is as it was before.  For everyone, that is a hard experience and we all cope with it in different ways.  Some here — the ones I annoy the most — are bitter and in denial about it, slogging from day to day until their time in China ends, while others buck up and set about replicating as close as possible the life they had back home.  Finally, there are the expats that grab the China experience by the the throat and ride it as hard and fast as they can in the time they have.  I like to believe that I’m in the latter category, and in fact, was convinced I was…until the sky turned brown. 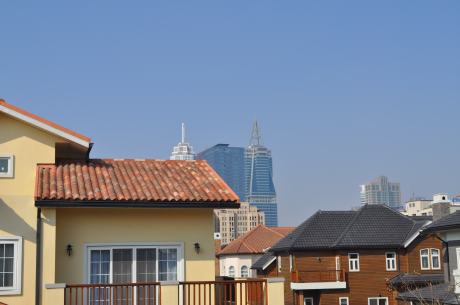 In the last two weeks, Shanghai (and much of China for that matter) has experienced some of the worst air pollution residents have ever seen.  It came on suddenly and has stubbornly hung around and, even in Shanghai, set new records for bad air quality.  All the children at the girls’ school have been inside for most of the two weeks as the pollution levels have been well above what is considered safe for outdoor activity.  My oldest daughter Cassidy has mild asthma and we have been watching her closely, though she shows no obvious signs of any breathing problems.

On a bad air quality day, not so much

I lived in L.A. for 6 years and have had some experience with dicey air quality, but nothing like this.  I hate the thought of breathing in this crap and have found myself inside more and more, monitoring the atmosphere through my air quality app on my iPhone, and the Shanghai Real Time Air Quality Index (aqicn.info) on the computer.  I am particularly watching the numbers on pollution referred to as “particles less than 2.5 micrometers in diameter” (PM 2.5).  They are very small and generated by power plants, vehicles and even wood burning.  They can lodge deep in the lungs, are extremely bad for people short and long term, and have been pretty high in Shanghai the last 2 weeks.  None of which makes me very happy.

And so this past week, I hit the wall, and it hurt.  When the air quality is really bad, which is not often here, a brown haze lowers itself onto Shanghai like fog.  I found myself standing at the window and looking at that fog, cursing its existence because it was something I had no control over.  And what the hell is it doing to our health?  Then, as the expat funk started to grab hold of me, I started thinking about all the other stuff that annoyed me about China, things that previously I would laugh off when other expats brought them up.  All of a sudden, I was pissed off at the bad driving, rudeness getting in and out of elevators, banking, Mandarin, Chinese television, the water, shoddy housing materials, and a whole host of relatively minor issues.  Prior to our arrival, I saw in a relocation book the emotional stages you will go through as an expat, kinda like the stages of mourning.  Once I got here, I promptly discarded that book because it was clear there was no way that stuff applied to me.  Yet here I was, 6 months later and raging somewhere between the grief and anger stages.

For the first time since we arrived in Shanghai, I thought about leaving China early, a thought I never would have considered before.  My only consideration up to that point had been the need to possibly stay longer than our allotted time in China.  We still needed to fully experience all Shanghai had to offer, and to travel to the many locales on this side of the world that we wanted to see.  But the reality is, if the air quality is this bad, it is harmful to my children and they are where everything starts and ends.  I could feel the expat funk starting to win and knew that the only way I was not going down the dark path of despair was to take some action. 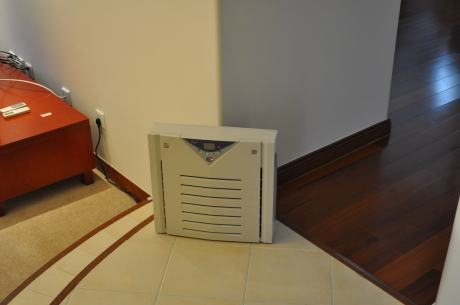 The big Alen air cleaner in the family room

Another friend here, a fellow Grosse Pointer, told me about a guy he knew named Leroy Jackson.  He works for Alen Corporation (alencorpchina.com), which makes state-of-the-art air cleaners.  Leroy came to our house and tested the air quality throughout.  Some parts were better than others, though overall not too bad.  So I bought air cleaners for our bedrooms and living areas.  I also bought some high-quality air masks (totobobo.com and 3m.com) so that if for some reason we do have to go outside and the air is particularly bad, we are protected.  Whether they all work or not (and I’m confident they do), when I hear the hum of those air cleaners, I get a feeling of relief knowing that I’m doing something for my family about the air around us.

The air quality issue took me by surprise, as it did many Shanghainese.  Air pollution is always considered a bigger problem for Beijing, which has had obscene air quality levels for months now.  It is not usually a problem for Shanghai, and certainly not for the duration we have endured of late.  As I’ve mentioned here before, China is and has been in go-go economic growth mode for the last 30 years.  There are now more cars and trucks on the road, coal-powered factories outside the cities, and people doing the things people do to generate emissions, in China than ever before.  Air pollution is up all over the country, but because Shanghai is close to the China Sea, there is usually enough wind to disperse the worst of it here.  It has been relatively windless and cold the last 2 weeks and so we sit in this brown stew.

What will we do?  If this lingering air pollution is some new reality for Shanghai, then our family will have some serious decision-making ahead of us.  If it goes away, as we assume it will, then we will keep having fun on our Shanghai adventure, knowing we are now prepared for the really bad couple of weeks of air quality each year.  In less than 48 hours, it will be the Chinese New Year holiday and we get on a plane for a week in Japan.  Traveling far and wide is part of this adventure and one reason why we ultimately came here.  We want a lifetime of experiences for ourselves and our children in the few years we are in China, but not at the expense of our health.  Unlike many of the residents of Shanghai, we are fortunate that we have the ability to make choices if we need to, and do what’s best for our family.  Personally, I just want the bad air to go away and take this nasty little expat funk with it.

AIR QUALITY MASK UPDATE:  We have had some bad AQI readings in the last two weeks and I’m hoping it is just an anomaly.  Along with the air mask referenced in this blog post, I have found another good mask that is well tested and proven to deal with 99% of air pollutants, including PM 2.5’s.  Also, my kids think they are kind of fashionable and have said they will actually wear these masks.  They are called Vogmasks and can be found at vogmask.cn.  They can be mailed to your house in Shanghai in about 3-4 days, and I like them so much we each have two.

3 thoughts on “Trying to Dodge the Expat Funk”