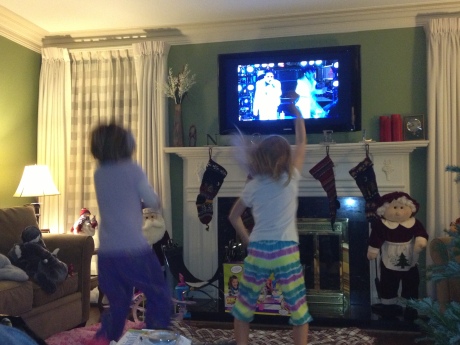 Stephanie and her BFF Ella rocking out Gangam-style on New Year’s Eve.

One of the many cool things about having a home in two different countries is that you get to witness firsthand the ways that differing cultures celebrate similar holidays.  Here in China, we recently celebrated the start of the Chinese year 4711.  The celebrations began with Chinese New Year’s Eve and ended 15 days later with the Lantern Festival under the full moon.  And it was my 2nd New Year’s Eve celebration in as many months. 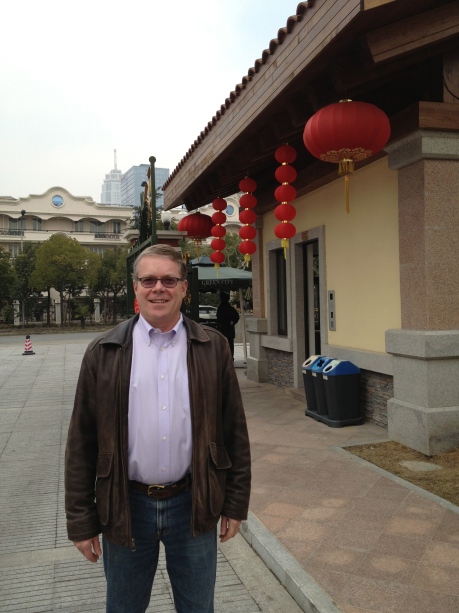 These red lanterns are everywhere in Shanghai, celebrating the Chinese New Year.

On December 31, 2012, I celebrated New Year’s Eve at home in Grosse Pointe Park, Michigan with my lovely wife, our youngest daughter Stephanie, and her BFF Ella. (Cassidy was at her first-ever NYE party, much to my chagrin.)  It was a fun, low-key night, as is our tradition.  We had a nice dinner, watched HGTV, channel surfed the various New Year’s Eve shows, and toasted appropriately with champagne at midnight.  Another tradition of ours, since we live so close to Detroit, is to listen to the annual cacophony of gunfire so prevalent in the city on New Year’s Eve.  (I’m sure there are also lunatics in GP firing guns into the air. It was just more thunderous on the city side.)  It was loud and furious-sounding, and I actually got a little nervous as our house is only seven blocks from the border with Detroit.  I had Steph and Ella go to the family room in the back of the house to watch TV, because I was concerned that what goes up (bullets) must come down, and the front of our house faces Detroit.  I had trouble getting to sleep that night as I listened to the gunfire continue into the wee hours.

On February 9, 2013, I celebrated Chinese New Year’s Eve at our home in Jinqiao, Shanghai with my lovely wife and both of our daughters.  It too was a low-key night spent packing for our trip to Tokyo the next day and eating the world’s most delicious dumplings made by our ayi, Sunny.  Later, we sat in the family room together and watched the season 10 finale of Project Runway on our Apple TV (avalaa.com) — we all believe Melissa was robbed —  and then headed up to bed relatively early.  As the girls sat reading with us in our bed (a new, crowded little family tradition of which Karen and I are wary), I listened to another concert of loud and furious-sounding booms.  This time, it was the fusillade of fireworks going on around us.   It’s gotten to the point now where I can readily distinguish the report of gunfire from that of fireworks.  Not flinching with each blast and having no concerns that something might come through the roof and harm one of us, I slept like a baby that night. 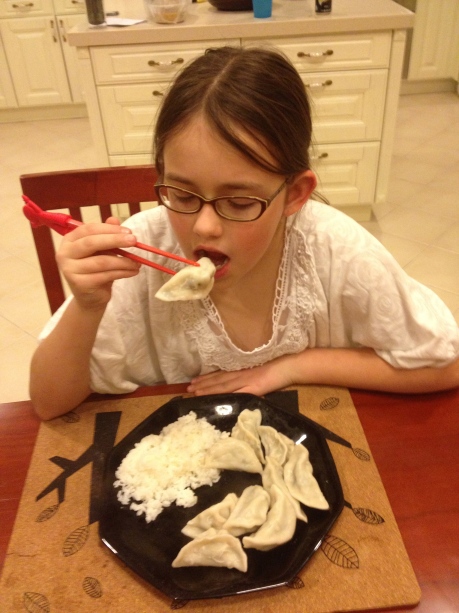 In China, fireworks are synonymous with New Year’s celebrations.  Their use evolved from the ancient practice of lighting bamboo to create crackling flames that were believed to ward off evil spirits.  That, in turn, evolved to lighting gunpowder in bamboo and setting it off, which lead to the present day ubiquitous use of fireworks.  For weeks before, during, and after Chinese New Year, there is the daily (and nightly) blast of fireworks, which the girls love to watch from our second floor balcony.  While the boom-boom can get old after a few days, I’ve been told that this year was a little tamer compared to past years.  That’s due to the unusual levels of air pollution we’ve had in Shanghai this year.  The near-constant barrage of fireworks normally creates a massive smoke cloud that hangs over the city and Chinese officials used the bad air quality to try to dampen the usual enthusiasm for firecrackers and the like. 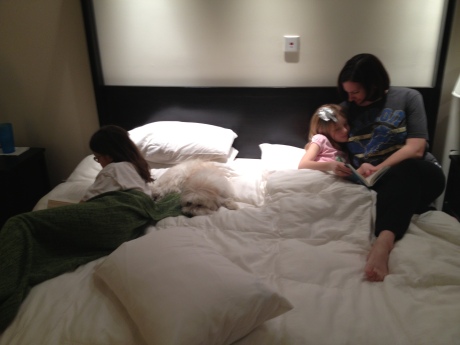 All my ladies (and dog) reading in our bed in Shanghai.

In Detroit, firing guns into the sky is synonymous with New Year’s Eve celebrations.  I’m not fully sure why (though I’ve heard much speculation), but it happens, along with the use of fireworks, pots and pans, and pretty much anything that makes lots of noise.  Every year prior to New Year’s Eve, the current mayor of Detroit makes a plea to the citizenry not to shoot guns into the air.  (Good luck with that.)  But there are always folks with itchy trigger fingers that make the holiday sound like opening day of deer season in northern Michigan.

So while my New Year’s Eve in China was less tense than my New Year’s Eve in Detroit, my night in Detroit was ultimately more special because of the family traditions we have established for that holiday over the years.  We hang together.  I make a dramatic dinner.  We drink, toast and go to bed — a perfect tradition.  Our family tradition for Chinese New Year is still evolving — we hope it will be a tradition of traveling, with a trip to Japan this year and maybe something tropical like Bali next year — also a perfect tradition.

As for the gunfire and fireworks traditions in my two cities, I find them both loud, and personally believe people should not be shooting guns in the air.  I guess really all that means is that I’m less likely to stroll the streets of Detroit on New Year’s Eve than those of Shanghai.  Xin nian kuai le.  Happy New Year from China. 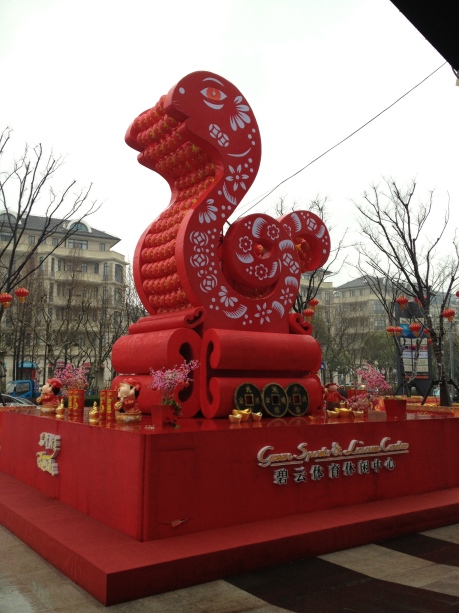 Some tributes to the Year of the Snake are beautiful and dramatic.

BONUS FACT:  In China, the year 4711 is called the Year of the Snake.  That is according to the Chinese Zodiac, which is based on a 12-year rotating cycle, where each year is represented by an animal — rat, ox, tiger, rabbit, dragon, snake, horse, goat, monkey, rooster, dog and pig, in that order (travelchinaguide.com to see your year).  According to the Chinese Zodiac, I was born in the year of the Ox, a fact that makes my daughters fall down laughing when I say it (still unclear why).  People born in the year of the Ox are said to be cautious, patient, industrious, and measured, human traits which I really do not possess.  Maybe that’s why they laugh.

And some are just goofy.