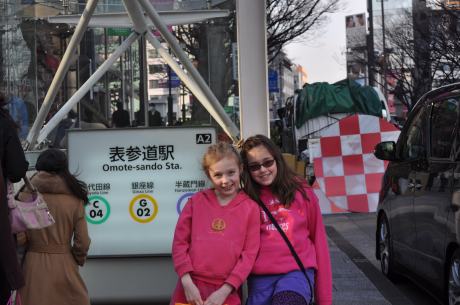 Cassidy and Stephanie in Harajuku District getting ready to head back down to the Tokyo Metro and go to our next stop.

Right now, in the East China Sea, there is a conflict over who owns a small grouping of islands, known as the Diaoyu in China, and the Senkaku in Japan.  It is one of the most serious Sino-Japanese disputes to occur since World War 2.  It also involves Taiwan, as all 3 countries lay historical claim to the islands.  Currently, there is lots of naval activity by all involved in and around the islands waterways and the chances of a “mistake” by one of the countries grows daily.  The islands are uninhabited, and some of them are actually just very large rocks, but there is abundant fishing stock and significant oil and gas reserves there.  The islands lay halfway between China and Japan and the issue of ownership revolves around which country controlled the islands at what period in history.  It’s a simmering dispute that has the potential to turn ugly.

I mention this situation because it brought to mind something a friend and mentor once told me long ago, which was to always look at catastrophic, or potentially catastrophic, events as economic opportunities.  (He then wisely had me invest in cement companies after a particularly bad earthquake in San Francisco.)  Due to the conflict in the East China Sea, hundreds of Chinese tour companies cancelled their planned trips to Japan during Chinese New Year this year.  Keeping my friend’s advice in mind I thought to myself, “hey, there could be a travel opportunity here, caused by this potentially catastrophic event.”

The opportunity was lower prices for travel to Tokyo during February as hotels, airlines, and tour operators would try to make up for the lost Chinese business.  I also thought the cancellations would lead to much smaller crowds at places like Tokyo Disneyland.  My travel agent here in Shanghai, Julie (crestrip@sh163.net), did her best to talk me out of this idea.  It’s really cold that time of year, she said, and Tokyo is never cheap.  Go in April when it’s warmer and everyone else goes to see the Cherry Blossoms, she added.  But I held my ground, convinced that we had a unique opportunity to go to Tokyo and have fun, save money, and beat the crowds. 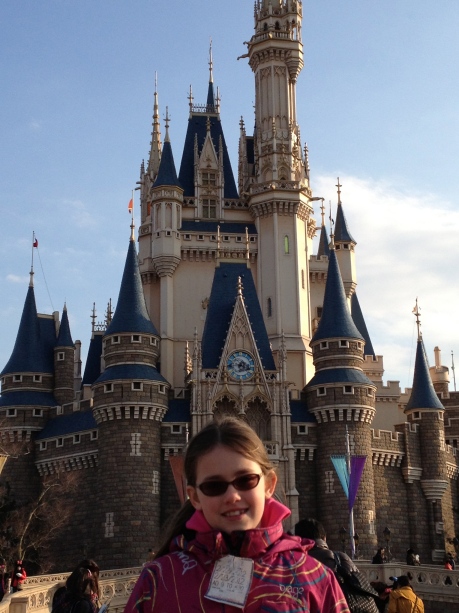 Cassidy at the happiest (and coldest) place on earth.

So I prevailed.  We went to Tokyo and had a lot of fun.  But boy was I wrong about pretty much everything else.  We spent the first 3 days in Japan at Disneyland, where we stayed on the property at the Disneyland Hotel (disneyhotels.jp), and, as Julie predicted, it was really cold.  We went through Disneyland with so many layers of clothes that the people working the “Small World” ride (which by the way is a freakshow in any country) had to give an extra hard push on the safety bar because I barely fit.  Once we got going on the rides, things seemed to warm up, but it was the waiting in lines where it got frigid.  Yes, lines and lines of people.  I was wrong about the crowds too, and my and Cassidy’s long held dream of taking turn after turn on fun, scary rides like Space Mountain and the Tower of Terror was not to be. 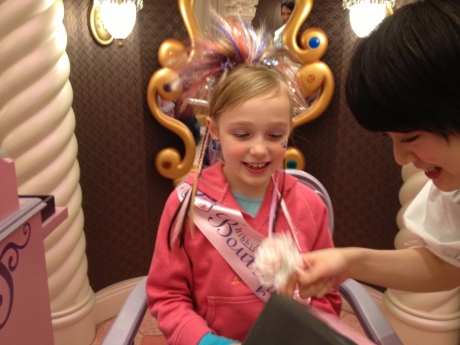 Stephanie getting the princess treatment at the Bibbidi Bobbidi Boutique.

Why?  Because I broke a cardinal rule of international travel — not researching in advance the holiday schedule of the country we were visiting.  Our first day at Disneyland was National Foundation Day in Japan, a holiday not dissimilar to the 4th of July in the U.S.  Known in Japanese as “kenkoku kinenbi”, it celebrates the crowning of the first Japanese Emperor in 660 BC — kind of a big deal.  It is always celebrated on February 11th and this year that was a Monday.  Apparently many Japanese take that week off to go to places like, oh I don’t  know, Disneyland.  Trust me, avoid Tokyo Disneyland on February 11th. 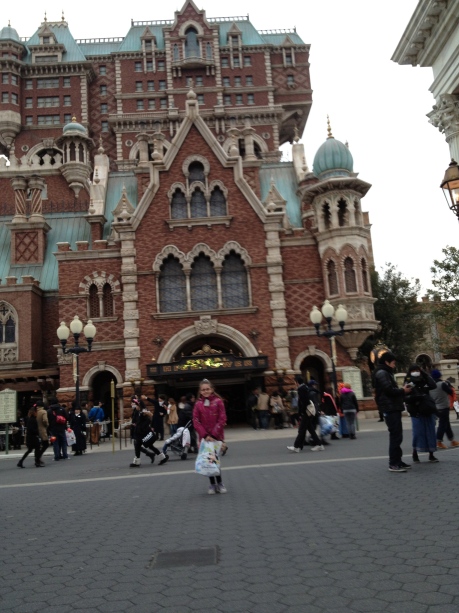 Cassidy and the seriously scary Tower of Terror, which is at DisneySea, a very cool park next to Tokyo Disneyland.

So Disneyland was crowded but, because we stayed on property, we got in early and the girls hit most of the rides they wanted to get on and had lots of fun, which is what it’s all about.  I was very surprised at how much Tokyo Disneyland was not oriented toward Western visitors.  I don’t know why I expected it, maybe because it is Disneyland after all, and everything about it screams America.  From the food, to signage, to the lack of English speaking employees, Tokyo Disneyland is clearly geared mainly for Asian visitors.  Our hotel room was typical Disney, however, in that it was clean, tight, and built just for sleeping after a long day in the park.  After 3 nights squeezed in together, we were ready to flee the room and the very expensive, non-Western food that passed for room service. 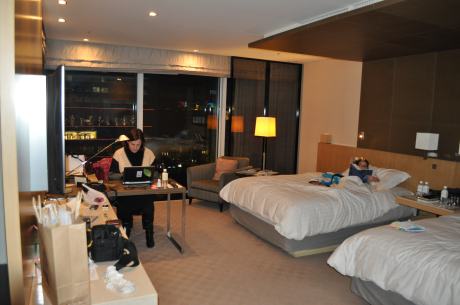 A little slice of heaven — our room at The Four Seasons.

Flee we did, to the sanctity of the Four Seasons (fourseasons.com/tokyo) hotel in downtown Tokyo, where upon entering our room, I almost wept tears of joy.  It was so beautiful.  The room screamed Asian chill and had 2 king size beds and lots of lounging space.  Because we were in a corner room, there were two sets of floor-to-ceiling windows that overlooked Tokyo and could be closed off with the push of a button.  We all literally spread out and flopped in various spaces around the room.  The girls put on the 3D glasses the hotel provided and watched a movie, while Karen and I hung out and enjoyed an adult beverage (or 3).  There is a reason the Four Seasons is ranked as one of the most family-friendly hotels in Tokyo, and along with great rooms, the ridiculously accommodating staff has a lot to do with that. 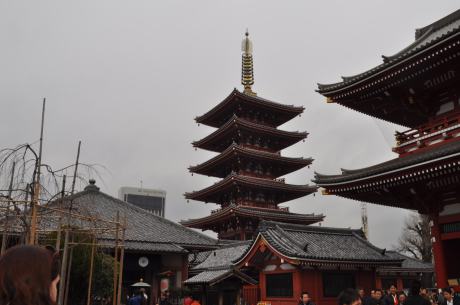 The Senso-ji Temple and adjacent Five-Story Pagoda in Asakusa.

Finally, I felt my China/Japan strategy start to pay off as we got a good deal at the Four Seasons.  Of course, the strategy went to hell once we started playing in Tokyo, because, as Julie said, Tokyo is never cheap.  Eating out and touring around the city is wildly expensive.  But the weather turned nicer for us and, when we could coax ourselves out of that comfortable room, we spent our days seeing as much of Tokyo as possible.  We spent time in the hip, upscale districts of Ginza and Harajuku, and then went to Asakusa to the Senso-ji temple, one of Toyko’s most sacred and spectacular shrines.  We had the good fortune to watch a prayer ceremony inside the temple, with incense burning and priests and worshipers chanting.  We also wandered Nakamise-dori, a crowded street full of small shops with vendors selling traditional Japanese wares.  There, we encountered packs of young school children on assignment to improve their English skills by surveying Westerners like us about our home countries.  It kind of threw the kids when, in our perfect English, we told them we were from Shanghai. 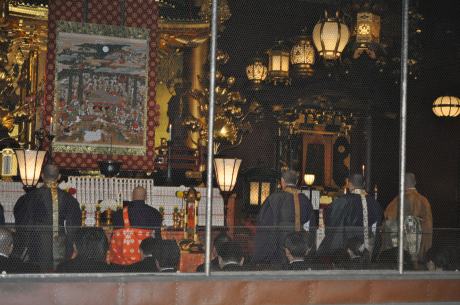 A Buddhist ceremony at the Senso-ji temple.

We did almost all our travel in Tokyo by subway (tokyometro.jp), which has the best subway system I have ever been on.  When you go to buy your tickets, there is an English button on the ticket machine that helps you conduct the whole transaction easily.  Once on, there is a highlighted map above each door that shows you where on the subway line you are, and a lighted arrow showing you the next stop.  And don’t get me started on the taxis in Tokyo.  Drivers in suits in well kept cars that get you to your destination quickly and without fear of death.  (This ain’t Shanghai.)  We took one on our last night in Tokyo and had a great dinner at the New York Grill at the Park Hyatt Hotel (tokyo.park.hyatt.com), which was where one of my favorite movies, “Lost in Translation” was filmed.  It looked so familiar from the movie that I half expected to see Bill Murray at the bar.  All in all, we had a blast in Tokyo, and I truly love the town. 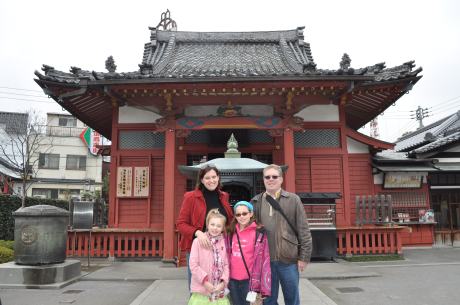 All of us in front of Awasima-do temple, built in the late 17th century, to worship the Japanese god Sukunahikonano-mikoto, a guardian of women.

What I saw in Tokyo was a clean, efficient, prosperous metropolis, confident in its place in the modern world.  That is everything that a fast-growing, newly modern Shanghai aspires to be.  They are two cities that together in partnership could dominate Asia economically for the foreseeable future.  The only thing getting in the way of that scenario are some rocks in the East China Sea.  As a Westerner happily living in Asia, I just hope everyone involved gives peace a chance. 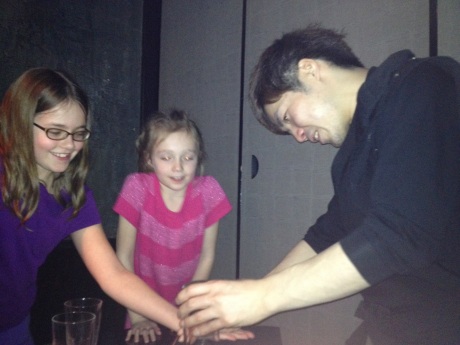 The girls watch a “Ninja” perform magic and sleight-of-hand tricks.

TOKYO TRAVEL TIP:  Tokyo has more Michelin-starred restaurants than any other city on the planet, and we had several very good meals there.  One of our favorites was at family-friendly Ninja (ninjaakasaka.com), a themed restaurant based on the ancient, secret world of Japanese Ninja warriors.  When you finally locate the front door, which is hidden from the street, you enter a darkened room where costumed waiters appear from nowhere and lead you through various “hazards” to your waiting table.  Shoes off, we entered a private dining space and sat seiza-style with our legs in a well under the table.  A Ninja came in with a scroll that was actually an English-language menu listing various set menu dinners, including Sushi, which I feasted on.  The food was good and later another Ninja came in and performed a variety of sleight-of-hand tricks that delighted the girls and puzzled Karen and I as to how he did them.  A super fun family meal that requires reservations in advance. 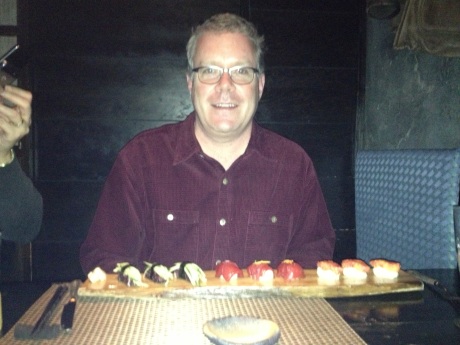 Do you know how many years (decades) I have been waiting to eat Sushi in Japan?!?!

3 thoughts on “Conflict, Opportunity, and Finally, Sushi in Japan”