Bottomless in L.A. Free-Flow in Shanghai. Either way, it’s all Brunch to Me

The girls and their Aunt Casey at our favorite brunch locale in Shanghai, Maya Restaurant.

I lived for six wonderful years in Los Angeles in the late 1980s.  If it wouldn’t get me in trouble with a variety of people, I would write a book about those insane times.  One of the chapters would be titled “My Boozy Brunches in L.A.”  Angelenos are crazy about brunch and, when I lived there, so was I.  Back then, my friends and I had no money, but we were gamers for brunch.  So we figured out ways to get the most for the least.  I particularly remember one Mexican restaurant in the Ocean Park section of Santa Monica that we frequented because it had an endless buffet and bottomless glasses of champagne.  The drunken madness that almost always followed, usually somewhere in the vicinity of Venice Beach, still has me wondering how my friends (you know who you are) and I didn’t get in more trouble.

Now I live in China and, much to my personal joy, the Shanghainese love brunch as much as Angelenos.  Before we moved, I assumed things like weekend brunches were something that we would long for until we returned to the States.  However, like so much else about China, I was way wrong.   Brunch is an event here, and in some instances, an athletic endeavor.

Back in the day, the alcohol portion of the brunch was referred to as “bottomless.”  Here they use the term “free-flow,” and does it ever.  There are champagne and wine, martini, bourbon, Sangria, and tequila-themed brunches throughout Shanghai.  And because a wave of your hand (more on that in another post) brings Chinese servers running, you never ever want for liquid in your glass. 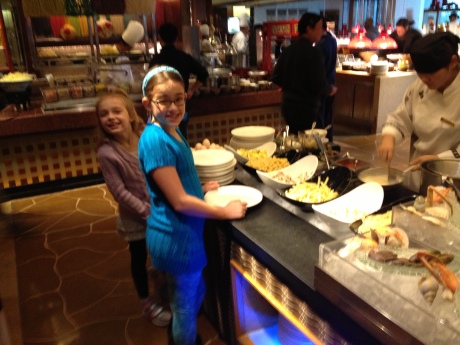 The girls waiting for omelettes at one of 10 kitchens serving brunch at the Yi Cafe in the Shangri-La Hotel.

Along with the free-flow drinks, there is a never-ending amount of food served at Shanghai brunches.  The Shangri-La hotel in Pudong has a restaurant called Yi Cafe that has 10 open kitchens cooking during brunch, serving every thing from dim sum to sushi, and Malaysian to Italian cuisines (shangri-la.com/shanghai).  It is awe-inspiring to witness, wonderful to eat, and complete chaos in execution. 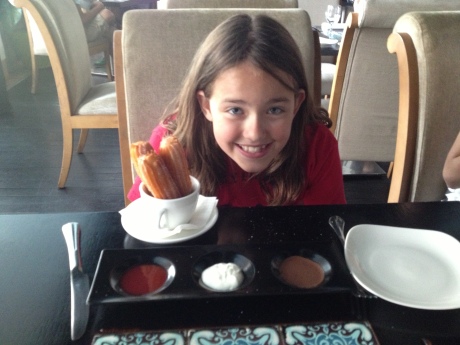 Cassidy getting ready to dig into the churros and accompanying sauces at Maya.

We have many favorites for brunch here, but all of us surprisingly agree on our most favorite, which is Maya Restaurant (maya-shanghai.com).  It is an upscale Mexican restaurant in Jing An district.  Karen and I love their brunch because the food is always creative and delicious, and the sangria is spectacular.  The girls love Maya because they get to have churros for brunch, a food product they know I would normally ban from their meal repertoire.  But brunch is special.  So we all get to live a little decadently, the girls with deep-fried pastry dough swimming in chocolate and strawberry sauce and covered in whip cream, and their parents knee-deep in sangria.  Everybody wins. 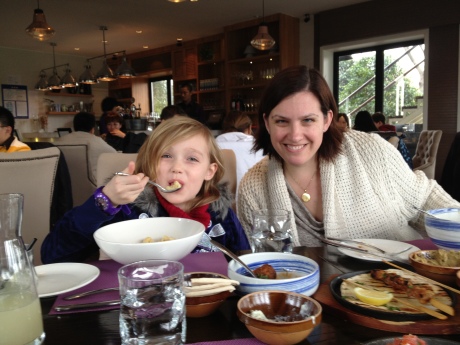 Karen and Stephanie at Madison for brunch.

I’m pretty sure brunch was not part of the Chinese culture originally, but they have embraced the concept wholeheartedly.  To me, brunch is a symbol of prosperity and civility, the former of which China has seen a lot of in the last several years.  Most of the places we go to brunch are Western-style restaurants and hotels, but the Chinese usually make up more than half the diners.  If you have ever been to a buffet-style brunch, you know that queuing and waiting your turn is critical to its success.  To the Chinese, not so much.  It is not in their nature to line up and wait for things, as we do in the West.  They are, and have been for centuries, competing for everything from food to living space with multitudes of their fellow Chinese.  They need to get what’s coming to them before it disappears.  My wife compares it to dinners at her house when she was younger and all 8 siblings sat down to the table to eat at once:  You need to get to the food fast or you go hungry. 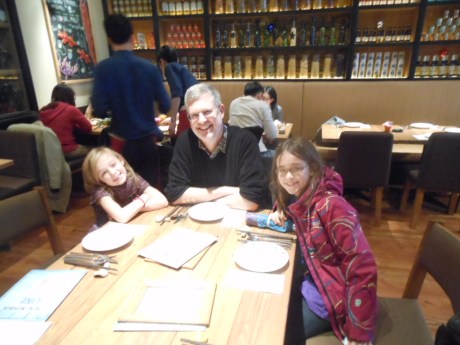 The girls and their Uncle Dennis at one of our favorite brunches in Shanghai, Elefante.

So brunch in Shanghai can be interesting, especially if it is buffet style.  There is so much food, however, that eventually you will eat.  There is also a broad diversity of cuisines available for brunch here.  Another favorite of ours is Elefante, the newest in Chef Willy Trullas Moreno’s growing empire of Mediterranean cuisine restaurants in Shanghai (el-efante.com).  Elefante puts a focus on Spanish food, including tapas, and its cheese and charcuterie plates are to die for.  It also has a great wine list with an emphasis on Spanish wines. 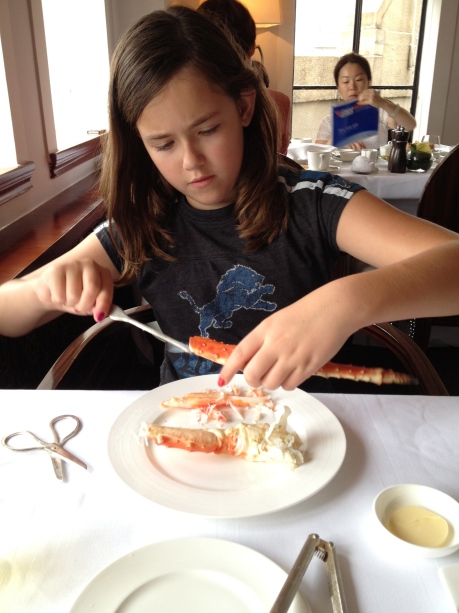 Cassidy digging into her crab legs at the Cathay Room in the Peace Hotel.

We are also big fans of the brunch at the Cathay Room in the Fairmont Peace Hotel on the Bund.  We stumbled upon it one day while sightseeing and ended up having a great brunch overlooking the Huangpu River and downtown Pudong (fairmont.com/peace-hotel-shanghai).  Built in 1929 by the Sassoon family, the Peace Hotel is a beautiful, Art-Deco building that holds a lot of Shanghai history within its very gilded walls (and floors and ceilings).  The Cathay Room continues the Art-Deco theme and serves a wide variety of European cuisine.  It is also the place where Cassidy happily discovered that she loves crab legs.

We have many other brunch favorites, including Madison, which serves modern American comfort food in a cool, NYC loft setting, as well as spiced hot chocolate that both girls love (Bldg. 2, 3 Fenyang Lu, Xuihui).  We have been to the Boxing Cat Brewery a couple of times for brunch, and along with the fantastic beer (best IPA in Shanghai) they serve classics like chicken and waffles with gravy in a setting that feels more like a French cafe than a Chinese brewery (boxingcatbrewery.com).  And I can’t talk about brunch in Shanghai without mentioning the one at the Kerry Hotel’s Cook restaurant, which is obscene, even by Shanghai standards (shangri-la.com/shanghai/kerryhotelpudong/dining).  More food, and more kinds of food, than I have ever seen.  I always hit the Japanese station for sushi and noodles when we eat there. 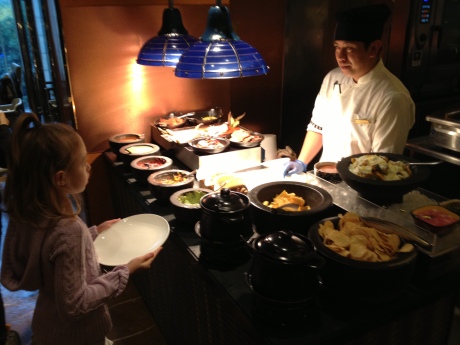 Stephanie at the nacho and taco bar at the Shangri-La.

I’ve described just a smattering of the many amazing places for brunch here.  Brunch in Shanghai is a lot like life in Shanghai:  Bountiful, diverse, and thrilling.  We also find it to be a wonderful opportunity to be together as a family.  And even though most brunches have free-flow alcohol, I’m far less likely to get in trouble here than I was in L.A.  That’s because now when they finally roll me out of the restaurant, I can nod off in the passenger seat as our driver Steven takes us safely, and directly, home.

2 thoughts on “Bottomless in L.A. Free-Flow in Shanghai. Either way, it’s all Brunch to Me”