Unchecking the Boxes in Cambodia

The family at the entrance to Angkor Wat temple.

To a person, every expat I know who has gone to Cambodia has said to me some variation of this:  “Do it in two, three days at the most.  Hit the temples early to dodge the crowds.  Then get out.”  So I booked Cambodia for two touring days over the Thanksgiving weekend.  The plan was to visit the famous temples in Angkor and get out, checking another “must see” box in Asia Pacific.  Simple.  And completely wrong.

Like Vietnam last year, Cambodia was a revelation to me.  It is clear that Southeast Asia and I were destined for each other, because I am madly in love with every country I’ve experienced there (including Thailand).  When we landed at the Siem Reap airport, which was very reminiscent of many small airports I have been to in the tropics, I was okay with my decision on how long to stay.  The terminal was tiny and chaotic.  There were several large airplanes scattered about the tarmac with tourists from all over getting off them.  And it was ridiculously hot outside.  Once off the plane and in the intense heat, I psyched myself up for what I knew was going to be two days of very sweaty touring.  The good news was this would be a quick trip, then it was back to Shanghai where we could focus on our Christmas trip to the Maldives, India, and Singapore.  I had just landed, but already was looking beyond Cambodia to our next trip.

That was a mistake, because Cambodia proved to be amazing.  We stayed at a wonderful resort called Journey’s Within that bills itself as a “boutique hotel,” but is actually a group of small buildings that all overlook a gorgeous, tropical courtyard with a pool (journeys-within.com).  The rooms are large, attractive, and clean.  Journey’s Within’s central tenet is to provide hands-on, personalized service to their guests.  It was started originally as a travel and touring company in Southeast Asia that evolved to include boutique properties throughout the region.

Our 2nd floor balcony at the very lush Journeys Within hotel.

Like much of Southeast Asia, Cambodia is inexpensive.  So we were able to get a two-room suite that had an incredible balcony overlooking the courtyard and pool.  Both Anna and Michelle from Journeys Within were incredibly helpful prior to our arrival in Siem Reap.  A week before we arrived, I sent a note to Anna inquiring about  which restaurants we should go to for dinner and if I needed to make reservations.  It was high season and I had no clue about food options in Siem Reap.  Imagine how happy and relieved I was when Anna went ahead and made reservations for both nights and arranged transportation for us to the restaurants.  Her note said “both have amazing food, both western and Khmer, so there are good options for the kids.”  Anna is why you stay at boutique hotels when you have the opportunity to do so.

Steph and our Cambodia guide Ravi

Of course, the restaurants were awesome, as was our stay at Journeys Within.  On our first day, Michelle had a tour guide, Ravi, ready and waiting for us at 8am with a driver.  There is nothing about Angkor and Siem Reap that Ravi doesn’t know.  He was a great source of information about the temples, as well as most of Cambodia.  We toured what is probably the most famous temple in the world, Angkor Wat.  I was nervous about how my girls would handle all the walking in the insane heat, but I was the one who did most of the sweating.  My oldest daughter, Cassidy, has recently developed a love for photography.  So she took my big, expensive Nikon from me and did all the picture taking.  My youngest, Stephanie, is a history freak and spent the entire two hours in Angkor Wat grilling Ravi with questions, all of which he answered.

We also visited the Angkor Thom and Ta Prohm temples that day.  Ta Prohm is the place where the movie “Tomb Raider” was partially filmed.  They were amazing places to behold, but, by the afternoon, we were all tired and ready to get back to the pool at Journeys Within.  As Karen and I relaxed by the pool, the girls went up to the room to change.  The woman who served us breakfast that morning, Rath, came to the pool with ice water.  I ordered a couple of beers and started to tell her what food the girls wanted for a snack.  She stopped me mid-sentence and said, “don’t worry, Mr. Hampton, Cassidy already ordered food from me.”  I was stunned she knew my daughter’s name after just a day!  Rath is another reason to stay at boutique hotels. 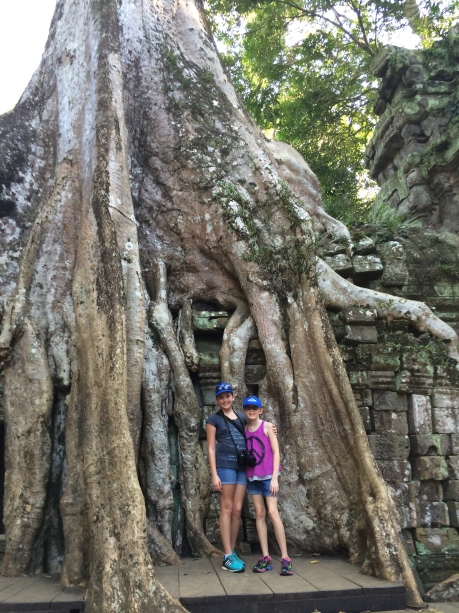 The girls at the beautiful Ta Prohm temple

So we had checked the Cambodia temple box.  Everything after that would just be killing time until we got out, or so I thought.  We went out that night to Genevieve’s, which was a lively restaurant with great food (tripadvisor.com).  It was right on the edge of the Angkor Night Market and, after dinner, we went roaming (angkornightmarket.com).  It was a cool, manic night market and the Cambodian people we encountered were fantastic.  There were lots of tourists mixed in, but it still had that Asian night market feel which makes me perfectly giddy.  Exhausted after a long day and night of touring, we took the tuk tuk that Michelle arranged back to Journeys Within.  A tuk tuk is basically a carriage wagon attached to a motor scooter that transports you through the absolute madness that is Cambodian traffic.  The girls and I thought it was a hoot.  Karen?  Not so much.

The next day, Ravi showed up again to take us kayaking on the Tonle Sap Lake — a tour Anna had recommended.  Yes, it’s a tourist destination, but this is where the magic of Cambodia began to kick in for me. The drive through the countryside was eye-opening.  From the vantage of our van we saw how the people of this 3rd world country live in serious poverty, but with resilience and joy.  After about 45 minutes, we got on a boat and followed the river to a floating fishing village called Kampong Phluk.  It is called a floating village because during the rainy season all the houses appear to be floating.  We were there during the dry season and the houses on stilts towered over us by 30 feet.  It was awesome to see this village of 1,000 families and the wooden plank houses on stilts in which they all lived. 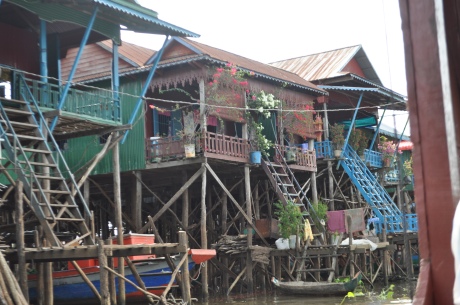 One of Cassidy’s photos of the floating fishing village.

We docked our boat at a house in the village and jumped into kayaks, all of us a little nervous about the journey ahead.  We ventured out into the river, transit boats roaring past us as we paddled in the insane Cambodian heat.  We soon came upon a forest that was flooded from the lake’s overflow.  It was a magical place and we kayaked through trees under water with birds overhead, all in the hushed environment of a rainforest.  It was a mystical setting and after paddling a while we kayaked back to the house, passing fishing boats with women meticulously unravelling fishing nets from the previous night’s catch.  They do this from the morning until approximately 4pm, when the fishing boats return to Tonle Sap Lake to lay the nets again and fish until midnight. 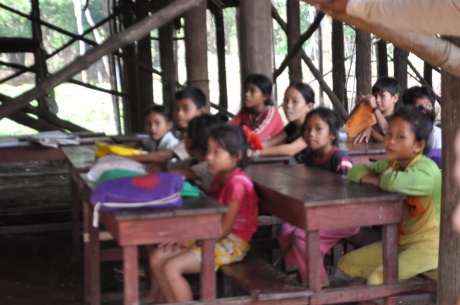 We got back to the house, docked the kayaks underneath its tenuous-looking wood stilts, and roamed the village of Kampong Phluk.  The abject poverty of the village was overwhelming, but the spirit of the residents was infectious.  Children were everywhere because it was lunch time, running and playing barefoot in trash.  They would wave to us and proudly say hello in English.  We came upon an outdoor school called the Pagna Language School, where the kids were at desks reciting English words from a chalkboard (pagnalanguageschool.org).  They paused to talk to us in English.  To call them adorable is an understatement.  Yes, some of it was contrived.  The schoolmaster hit us up for a donation (which we gave) —  but when we left they earnestly went back to their English studies.  We finished our visit with a tasty lunch of Tom Yum soup and fried rice in a village family’s house on stilts.  It was cool, but a little scary.  We were 30 feet above ground and walking literally on planks.

Lunch 30 feet in the air in a house on stilts.

The floating village was an amazing peek into a slice of Cambodian culture, but because we were leaving the next day, we missed so much more.  My good friends Len Pritchett and Teresa Guitterez and their families were in Siem Reap at the same time we were.  They did the temples as well, but also some different activities that we could have experienced, had we stayed longer.  Len and Teresa both did a cool back country ATV excursion that allowed them to visit several villages and temples off the beaten path, and encounter Cambodians in daily life (quad-adventure-cambodia.com).  Teresa described the tour like this:  “We got to see how people live, cook, work, shop and were lucky enough to visit a school.”

My friend Teresa and family meeting locals in a Cambodian village while riding ATV’s.

Len and his family also took a horseback tour on rescue horses through the countryside, encountering lots of children that hit them up for candy, which they obliged (thehappyranch.com).  Teresa took her family on a sunrise bike tour of Siem Reap that allowed them to visit temples and villages and encounter a more “authentic” Cambodia (grasshopperadventures.com).  Both Teresa and Len came away with the same feeling about Cambodia that I did.  This is a country and people that have much more to offer than just awe-inspiring temples. 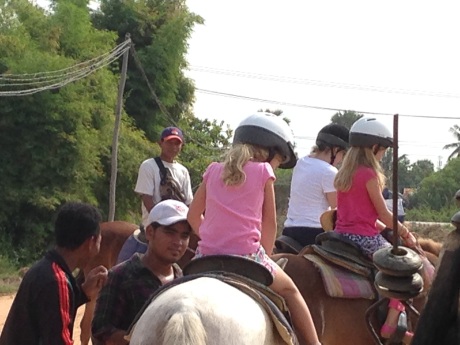 My friend Len’s girls saddle up for a ride in the Cambodian countryside.

On our last night in Siem Reap, we took a tuk tuk to a French restaurant called La Cabane (tripadvisor.com).  It was full of French people, which was a good sign, and we had another fun meal.  After, we once again visited the night market and continued our encounters with wonderful Cambodians.  I was in my happy place, which made me realize how truly awesome our China adventure has been.  When we were home last summer, my brother Tim asked me which place I liked the most from our travels so far.  When I told him Vietnam, he looked at me like I was from another planet.  He was blown away by my answer because, like me before I moved, he has never been to Southeast Asia.  Vietnam, like Cambodia, seems like a scary, strange place and really far away.  Southeast Asia and its people are now kindred spirits of mine.

I have written about “checking the travel boxes” several times before.  If you live for a time in Asia Pacific, and want to see all it has to offer, sometimes it is necessary.  Then, there are those times, as I found in Cambodia and Vietnam, when you need to discard that notion.  These places and the people that live there are so amazing, and their culture so compelling, that you just need to wade in for an extended period of time.  I made a mistake in Cambodia and I hope this post prevents others from doing the same.  It is an amazing country and its people are incredibly kind and wonderful.  Yeah, you have to hit the temples.  Do that in one day.  Then spend the rest of the week exploring the country. 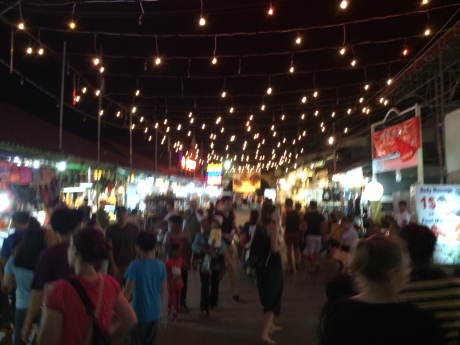 Dinner fare at the night market — cooked giant crickets or snake on a stick — your choice!

9 thoughts on “Unchecking the Boxes in Cambodia”